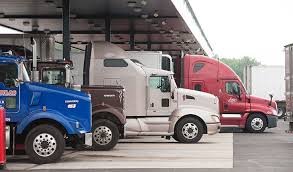 If you haven’t heard by now, you likely will: There is a global oil war currently under way. So, what happened? Well, without getting too into the geopolitical weeds, Russia recently refused to cut back oil production to wound the U.S. shale industry. It is widely known that U.S. shale producers require an oil price of around $40 per barrel to remain competitive. As of May 3rd 2020, price for a barrel of Brent crude oil sits at around $19 per barrel.

In response, the Organization of Petroleum Exporting Countries (OPEC) asked Russia to decrease production to keep prices high. When Russia politely refused, Saudi Arabia responded by increasing their own production, thus flooding the market with oil. The timing of this move represents a risk for the Saudi Arabian economy. With a budget surplus and some of the largest stockpiles of foreign reserves in the world, Russia is well-placed to ride out the storm.

Now the question is: How will these oil price wars affect the trucking industry? Furthermore, with the stock market tanking and a dangerous new virus on the loose, we are in perilous times not just for the trucking industry, but for the world. That being said, trucking and transportation provides economic lifeblood to our economy. Their health, and the health of truck drivers around the country, is of paramount importance.

The trucking sector is primarily driven by economic factors, whether macro or micro. Currently, the oil price war represents one of the largest macroeconomic factors driving trucking industry outcomes. But let’s dig a little deeper.

The fact is this: There has always been tension between oil-producing countries and states. Although OPEC often puts out a united front, there isn’t always 100% agreement between member states. And as OPEC’s de facto leader, Saudi Arabia holds a lot of sway. And yet OPEC is not the only game in town. This is where Russia, the United States, and other players come in.

Still, under their brash new ruler, Saudi Arabia is not holding back. Known as MBS, Mohammed Bin Salman has accused Russia of cheating on oil production agreements. The Saudi Arabian government has also reported giving Russia multiple chances to close the gap and begin properly pricing their oil exports.

Other areas of the world fall under similar geopolitical uncertainty. You have countries like Venezuela, crippled by sanctions and full of unrest, a place where the elites survive off oil money. Then, just next door, tiny Guyana has made big oil discoveries off its coast, prompting some to wonder how these discoveries will impact the broader market.

Yet, the tension between the big players only gets higher. Although it might be only a marriage of convenience, with Russia and OPEC flooding the market with cheap oil, American producers could be in for a tough time. And it isn’t just U.S. oil producers that need to worry. There is definitely a knock-on effect across all industries.

And since Russia is intent on harming the U.S. shale industry, this could be considered a roundabout economic attack on the United States. The U.S. energy sector has been a major bright spot in the U.S. economy. Yet, from the trade war to the oil war, this resilient industry is beginning to show some cracks.

The Games We Play

The recent geopolitical moves between Russia and OPEC aside, there is a lot more to think about. These are serious times, from the novel Coronavirus to escalating wars in the middle east. And any one of these myriad crises could impact the trucking and transportation sectors. But how?

The main way these changes impact the industry is through a drop in fuel prices. And while it is easy to assume that lower prices at the pump is good for the trucking industry, that isn’t always the case. Situations like these create capacity problems. As commerce dries up, opportunities for trucking companies and individual truck operators will dry up as well.

Even more, major market issues effect trucking in other ways. Take the big market crash on March 9 as one example. As Coronavirus fears spread, a trade-triggered circuit breaker shut down trading to give people a chance to get their breath and think things through. In all, the market dropped by over 1,700 points.

This has a direct impact on the transportation sector because people are buying less goods. Still, trucking companies are glad to pay far less for diesel fuel. And already in 2020, we have seen diesel drop by a whopping 22 cents per gallon, even after hitting a six-month high at the a of the year.

As with any high-stakes game, whether geopolitical or not, there are bound to be surprises and unexpected twists – and this oil war is does not disappoint in that regard.  In this case, Saudi Arabia’s response seems to have taken the Russians by surprise. Russia was not expecting MBS to counter them with an even lower oil price.

This puts Russia in quandary. Although Russia has a very strong balance sheet with a mass of foreign reserves, a prolonged subdued oil price could quickly eat into the rainy-day funds. It is very likely that Russia or Saudi Arabia will initiate a face-to-face meeting to work out a resolution to the impasse.

The OPEC goal was to cut overall oil production by 20%. While it is still unknown as to whether Russia will accept a 20% reduction but expect to see some movement on it before springtime. But now the question is, how might the spat between Russia and OPEC impact the trucking and transportation sectors?

How Trucking is Impacted

Some might say the trucking industry is not directly impacted by the price of oil beyond fuel, yet that is not exactly true. How? Because rapidly falling fuel prices boost a fleet’s cash flow temporarily because fuel surcharge payments based on earlier higher prices are coming in as carriers are paying lower fuel prices. While this situation offers temporary relief, there is always a risk the dynamic will change.

It is also important to not look at falling fuel prices as a big boon to the industry that will help counteract other problems. There were many signs that other negative economic factors were already percolating well before the oil price war. Not only was the global economy showing signs of cooling off, but then the Coronavirus appeared.

What will this look like in motor carrier real life? You could find a situation where fleets are paying historically low prices at the pump yet have no cargo to haul! Paying low prices doesn’t mean much if you aren’t making much money to begin with.

Also consider the truck drivers that support the energy sector and oil industry in the United States. If the oil industry takes a big hit because of the actions of other countries, all the truck drivers who support that industry will be looking at either a loss of hours, income, or even their jobs. Truck fleets that support the energy sector will be looking at some major problems.

Remember back in 2018 when the trucking industry experienced that big surge? That was mainly because of flatbed activity in the oil markets. Trucks need to haul equipment for both exploration and exploitation of resources. The need for specialized flatbed carriers was especially acute in the Permian Basin, home to millions of barrels of oil.

Another important factor is truck sales. Lower oil prices could negatively impact North American truck sales, particularly in the Class 8 market. Why? Because one of the main selling points for today’s advanced Class 8 models are the much higher levels of fuel efficiency these vehicles get, now at 8 – 12 miles per gallon. In a lower oil price environment, many fleets may defer new purchases and simply continue using old equipment.

The biggest knock-on effect for the transportation sector will be any GDP or supply chain shrinkage. And this is about more than just the price of oil. Whether it be the Coronavirus, oil price war, or some other major global challenge, consumer sentiment will likely drop, purchases will decrease, and less overall goods will be shipped. Let’s just hope the worst-case scenarios don’t materialize and we are all back up and humming again by the summertime.

QuickTSI is your one-stop-shop for everything you need to run your transportation and freight logistics business. Our website allows you to post loads or find trucks, post trucks or find loads, look up carrier profiles, view trucking companies, find truck driving jobs, and DOT medical examiners.